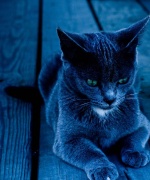 My cat's name is Hawkwing2703 (I tried Hawkwing but it was taken) he is Riverclan born his parents Moonclaw and Wavepelt,
but they were attacked by rogues when they were out of the Riverclan camp with Hawkkit, he lost them and ended up on Thunderclan territory and was found bye a Thunderclan warrior. He was raised as an apprentice in Thunderclan his mentor was Duskwhisker he became a warrior after saving 3 kits from a snake his warrior name is Hawkwing and he lived in Thunderclan from then on. (sorry if this isn't were I'm supposed to post this)

Hawkwing, this is about Streamstar's challenge and your post isn't relevant. Please post your character history here http://www.warriorcatsforum.com/f12-create-your-cats