n. the state, fact, quality, or condition of being singular. 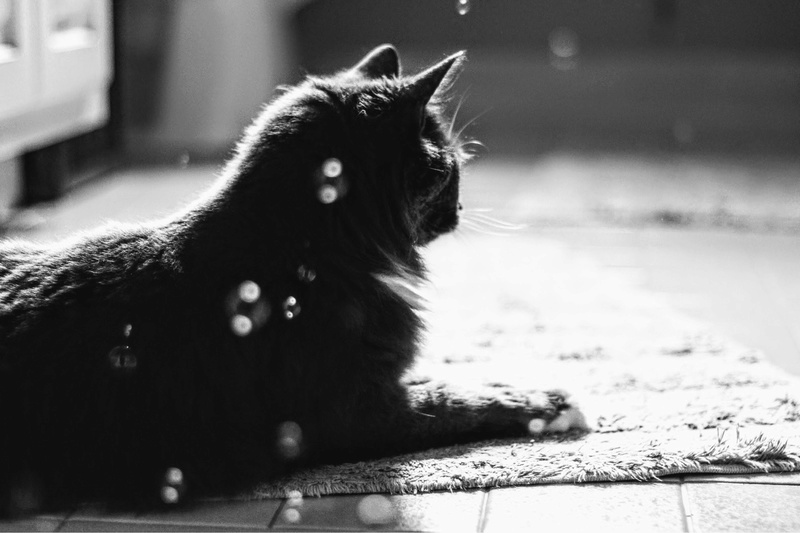 n. a point at which a function takes an infinite value,
especially in space-time when matter is infinitely dense,
as at the center of a black hole.

inwardly❤
-----
personality: singularity is an easy-going fella. he's wise, he's grizzled, maybe a little bit loony for his age. he always has something fun to say, always willing to make light of any situation no matter how heavy or serious. years of being a kittypet have made him soft and carefree, as though the world is his playground and he's there to play, not simply survive.he underestimates every challenge thrown his way, but this smug overconfidence and ambition means that he'll never turn down a chance to shine. singularity hates being alone, gives every cat the benefit of the doubt and firmly believes in second changes. although if one proves his trust misguided, he could serve to be a somewhat dangerous enemy.

skills: physically, he's not necessarily the strongest, fastest, or lightest. he'd be hopeless in a fight if not for his reflexes, quick thinking, and common sense. he'll always know when to engage and when to run, he'll use every trick up his sleeve to throw his opponent off of him. being fed by twolegs for most of his life also means he's not the best hunter, either. in his loner days, he'll usually opt to scrounge for twoleg leftovers instead of hunt for fresh food in the forest. in a group environment, he's a charismatic and bold leader, he's good at talking to other cats and possesses exceptional problem-solving skills and rhetoric.

Reach my hand out to cover the mouth
But in the end, spring will come someday
The ice will melt and flow away
Tell me if my voice isn’t real

background❤
-----
family:
illusion (daughter, alive)
mistress/mist (daughter, dead)
cherry (mate, unknown)
history: singularity's earliest memories involve a house, an old twoleg shack in the woods, a sanctuary. his first name, given by his mother, was 'augustus'. the only kit in his litter, his mother was a black she-cat who always dreamed of living in the wild with his father, who was in turn a member of a group of cats  he would soon learn to be called a clan. His father, for whatever reason, always refused, would say words that  he didn't yet understand. But his mother remained defiant. one day, when he was barely six moons old, she left, never to be seen again. a season and a moon afterwards, his father visited the shack with his eyes trained on the ground. mournfully, he explained that his mother had been mauled by a fox just outside his camp.

augustus, at the time, was distraught. he demanded to know if there were cats nearby, if anyone tried to help her at all. his father tearfully explained that his clan had recently fought a battle. there were no able cats nearby, none of them could have risked further injury to help another cat, let alone a kittypet. bitter and filled with newfound hatred for the clans and other cats in general, he ran away from his twoleg shack, put as much distance between him and the clans as possible. for many, many moons, he was alone, even adopting the name 'singularity' to reflect this. but as the moons passed, he found that it wasn't possible for a cat like him to truly be alone. he made friends with every loner in the area, even taking a mate- a gorgeous red spotted tabby she-cat who simply called herself 'cherry.' singularity and cherry had two kits together, both she-cats; illusion and mistress. for the first time since his kithood, he felt truly happy.

however, good things never last. on her tenth moon, one of his kits moved out to live alone. through rumors, he heard that mistress had changed her name to 'mist' and died of greencough shortly afterward, surrounded by no loved ones, in the company of nobody but herself and a few waiting rats. singularity, fueled by guilt and grief, embarked on a lonely quest to find anything left of his departed daughter, be it remains or information, leaving his mate and remaining daughter to fend for themselves. he never did know what happened to them after he left. after several moons of searching, he ultimately gave up. lost and mountain-lengths away from everything he once loved, singularity resolved to build a new life for himself where he was. however, one day, when he stumbled into an abandoned twoleg shack in the woods, he realized that he had come full circle, had entered clan territory once again. though it seemed that his hate for them had long but dissipated.
wow this looks really ugly on mobile sakdjklasklj