Guys Lets Roleplay: Bringing Back WCF From the Dead

Guys Lets Roleplay: Bringing Back WCF From the Dead

To those of you who still come on the forum. We should roleplay a bit to try to bring the site back. Just join in the roleplay, no need to wait to get accepted or anything. The post is pretty short, I'm just trying to start something quickly. Feel free to make up characters to use, or use other characters you have.

The Clans are falling apart, few warriors remain. They have gathered at Fourtrees to try to survive together. The prey has become as scarce as the cats,

Streamstar looks around the empty clearing for some sign of life. Over many moons, cats left or disappeared, until only the leader herself remained. It was the full moon, so she hoped some of the remaining cats would still follow the tradition and come to Fourtrees. They needed to work together if they didn't want the clans to completely fall apart. The silver moonlit glinted on her fur as she turned suddenly towards rustling in the bushes. "Who's there?" she shouted. If she was lucky, it would be another cat. Though since the clans had fallen apart, badgers and foxes had become more difficult to chase away. She didn't doubt that one of them could make it to the meeting place.

Moonsong couldn't help a slight twitch as more and more cats entered the clearing, even as her eyes had hazed over and she was doing rather well at not noticing anything save a quiet mental acknowledgement of each warrior and their scent. Lilacstar and Moorstrike were there, at the least, and that was as far as her recognition went for... anyone. Her tail had stopped tapping some time ago, and she wasn't, particularly, remembering her mate's return in any case.

Last edited by Moonsong on February 1st 2016, 14:33; edited 1 time in total (Reason for editing : nothing happens but she is Here)

Ghosthearts ears flicked back slightly as more and more cats came to the clearing. He had almost hoped they'd all be dead, or at least most of them. Absently he nuzzles and nips at Moonsongs ears, at least she's here to be amusing. Of course he could terrorize the other cats, that could be fun.

Redstar entered through the clearing with a vole in her jaws. She looked around the clearing, noticing more cats were there than before. She padded over to the fresh-kill pile, letting out a sigh. "It's so small..." she thought to herself, dropping the vole before sitting next to her two clanmates. "I'm sorry I was gone for so long, did anything happen while I was gone?"

Shimmerpaw carefully stepped her way out of the underbrush, and into the area she used to visit on these nights with her clan. Ever since the clans had become a mess, Shimmerpaw had lost track of her old clanmates. The forest she had grown up in had grown to become a dark and forbidding place. Regardless, she sauntered into the gathering place that was once so familiar. When she noticed other cats had joined in the area she let a gasp escape her mouth and she bounded over to the small group of cats and smiled. "It's been so long.. does anyone remember me?" She squeaked.

Many, many suns have passed since Scarheart saw the last of the warriors leave Shadowclan. She laid sprawled out against a rock in uncharted territory near the Shadowclan border. Two weeks ago she set out on a trip to the Moonstone to see if there was anyway for Starclan to help them but, she still has yet to return from what should've been a suns worth walk. She breath calmly, letting her black fur take in the suns heat. She missed her clan dearly but for being gone for two weeks, everyone is most likely gone. The border markers have gone stale, no patrols have come but the border, no animals squealed and cried as their life was taken for food for the clan. She sat up and jumped down from the small rock. Her red eyes glistened with heart-break and failure to help her clan. Her walk was weak and staggered. She knew she had to keep going strong but couldn't forget the dying faces of her patients and the warriors leaving without hope for the future of their clan, becoming rogues and loners. Scarheart felt like a loner now but, even more like a trespasser as she stepped out the Shadowclan border, heading back to the camp she called Home.

Her heart bounded with joy for only a second as she passed by an old tree with multiple claw marks, the tree she climbed first. Shadowclan cats aren't meant to climbed trees but, there was freedom and fun in it. She could see the entrance. More skips and with in the flick of a tail she was at the entrance. She popped through the entrance, hoping to see cats still thrive, showing off that they were the strongest clan out there. Nothing. It was just a bare land of nothing. She could see no cats, no fresh prey stacked in the pile, no kits squabbling about destroying her collection. Even at a time like this she wouldn't have cared if they destroyed it. She was glad to return home but this ground didn't look like the place she gladly knew as home. The faded echoes of laughter lingered in the air as she sat down with disbelief and, for possibly the first time in her life, fear. True, doubtful, terrible fear.

~Words cannot express how crappy this was but I wanted to get in on some of this action. Sorry for any grammar mistakes~ 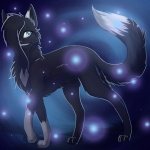 At first glance, fantasy could appear as a spitting image of reality.

A she-cat pondered this as she looked over the vast stretch of land that belonged to, or perhaps once belonged to the Clans. She had always existed somewhat outside of them, an outcast that eventually found solidarity amongst other outcasts. Once, she had been a part of something, had been but a fracture of a powerful and ostensibly indivisible whole, but now freedom, it seemed, was much lonelier than many made it out to be. She supposed that this was the epiphany every cat needed in order to understand the minds of the Clans.

In somewhat somber amusement, the she-cat flicked her ears and licked her paws.

And like freedom, reality was a fickle queen, bittersweet and unpredictable. Once kind, reality had left the forest and surrounding territories in a dire state of unrest. Reality, in one fell swoop with her cruel claws, had knocked over everything the Clans and the rogues held dear. However, like most queens, reality had a soft side. A long time ago, she watched with shining eyes as the cats in the area survived and thrived, helped nurture all living things, set major events into motion with gentle sheathed paws. Some mothers could be called cruel, but none were evil. Perhaps somehow, someday, they could have that reality once again.

Or had it all been an Illusion?